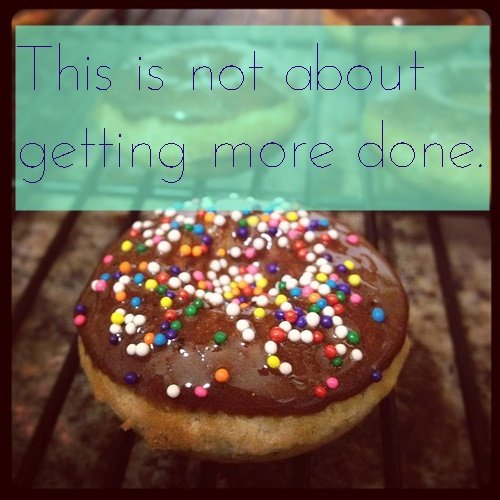 Donuts have nothing to do with anything

Do you ever end the day with frustration that you didn't get more done? Even if you marked stuff of your list, it just wasn't enough. You sat at the computer, or dye pots, or jewelry table for 8 hours and yet…you just didn't get everything done.

Yeah. I hate that feeling.

I mean, I really hate it. It ruins everything. It makes me grumpy in the evenings. It sucks momentum away from projects. It totally kills my enthusiasm.

To avoid it, I tried to do more. I tried to beat back that I-didn't-do-enough feeling with doing more. I played its game. I accepted that the feeling meant something, that it was objective, and that I wasn't doing enough.

I put more on my list, tried to figure out how to get more done in the time I spent.
But that didn't fix anything.

It was exhausting and not very much fun.
And it looks a lot like a day job, which I left, to work for myself.

Something has to change. And just as soon as I acknowledged that it wasn't me that needed to do more, it's that judgement, the “I didn't do enough” at the end of the day that had to change.
I don't need to get more done, I need to stop staring at the screen when I'm not getting anything done.
{Click to tweet this!}

This isn't about taking breaks so I'm more productive, it's about changing the standards.
I'm not seeking productivity, I'm seeking fun. I'm seeking fulfillment. I'm seeking that feeling where I'm satisfied with what I did, that I believe I'm enough, that I'm not holding myself to some ridiculous standard.

It's not about the productivity

Productivity is about getting more done. About making more products, more money, more connections, more traffic, more followers. And it's enticing, because you know you do need to grow those numbers, get stuff done, make connections. Getting stuff done become the highest priority. So you fill in your time with getting stuff done. It doesn't matter if it's the right stuff, or the effective stuff, you just try to get more and more done each day. But getting more done for more's sake won't get you anywhere. And it'll leave you tired, and bored, and unenthused.

Let's circle back to what started it: making products, connections, ideas, making. If I want more of that, the way there isn't through more productivity. The way to doing what I want to do is to follow what I want to do.

For me, following momentum, enthusiasm, etc means that I walk away from the computer once I've reached that slow, can't-think-time of the day (around noon; I start at 8am). I go get lunch, or go to a yoga class. I put away the computer and read. Or write. What I do doesn't matter, what's important is that I'm allowed to, nay, expected to, because my goal isn't to get as much done as possible in one day, but to follow the momentum and water my enthusiasm.

And even writing that, I can feel all the worries rise up: Will I ever get anything done? Will I have a huge to-do list I just have to power through?

Those are smart concerns, and I've struggled with them since I first decided to do away with productivity a month ago. After rigorous scientific testing, I'm happy to report that nothing exploded. Everything got done. In fact, I added a big new pile of work by doing a read-along inside the Starship (2 extra emails/week, full of projects, links, resources, and brand new thoughts).

What is different is me. I've had better ideas. I've acted on inspiration. I've been smarter and quicker for my clients.
And I've got much more important stuff done (yeah, a lot of the unimportant stuff has fallen away).

If your days weren't about productivity, what would they be about?

5 Comments on This is not about getting more done.