Do you know about the Craft Film Club Mercedes started?
It's not too late to join!

This month I'm the hostess, which means I get to pick the movies and encourage y'all to share your thoughts, creative inspirations and projects.

Ok, the French major in me has to point out that their titles are SO much more fabulous in their native French! So if it's not terribly pretentious , I'm going to refer to them by their French names.

I first saw this gem on January 4th, 2002 as an enthusiastic sophmore French major with my adorable boyfriend (who grew up to be my husband) at a little art theater in downtown Dayton. The Neon only has 2 screens, but they have a fantastic coffee bar, wine beer and fancy popcorn and plush velvet seats.

I remember feeling delighted (and a little shocked) throughout the whole movie. Who knew movies could be this drenched in mood and color and bonhomie? 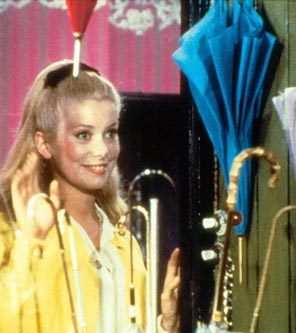 I've only seen this movie once, on the recommendation of Jane Brockett in The Gentle Art of Domesticity. Coloful, bright and yes, a musical. Completely, delightfully bright (and parapluies is just a fun word to say). Parapluies!

I picked these two movies because of their use of color to illicit mood (and because in 7 years of studying French I watched a zillion french movies and want to share a few of them with you). I also think that Amelie had to  be inspired just a little by the magically musical world of Parapluies…and maybe a bit by Catherine Deneuve's style.

I can't wait to see what crafty projects they inspire for you!

I plan on making at least a yarn inspired by each of them…what are you going to make?

Postscript:  An update for you who have been waiting!
I'm deep in writing mode on the Guidebook for everything-I-know-about-marketing-your-handmade-goodness (yeah, I don't have a name for it yet). You can get first dibs on it (along with getting it first, you'll also get to help me write it) by signing up here.
Note: If you're in the Bake Sale Marketing class, you're getting it as part of the class.